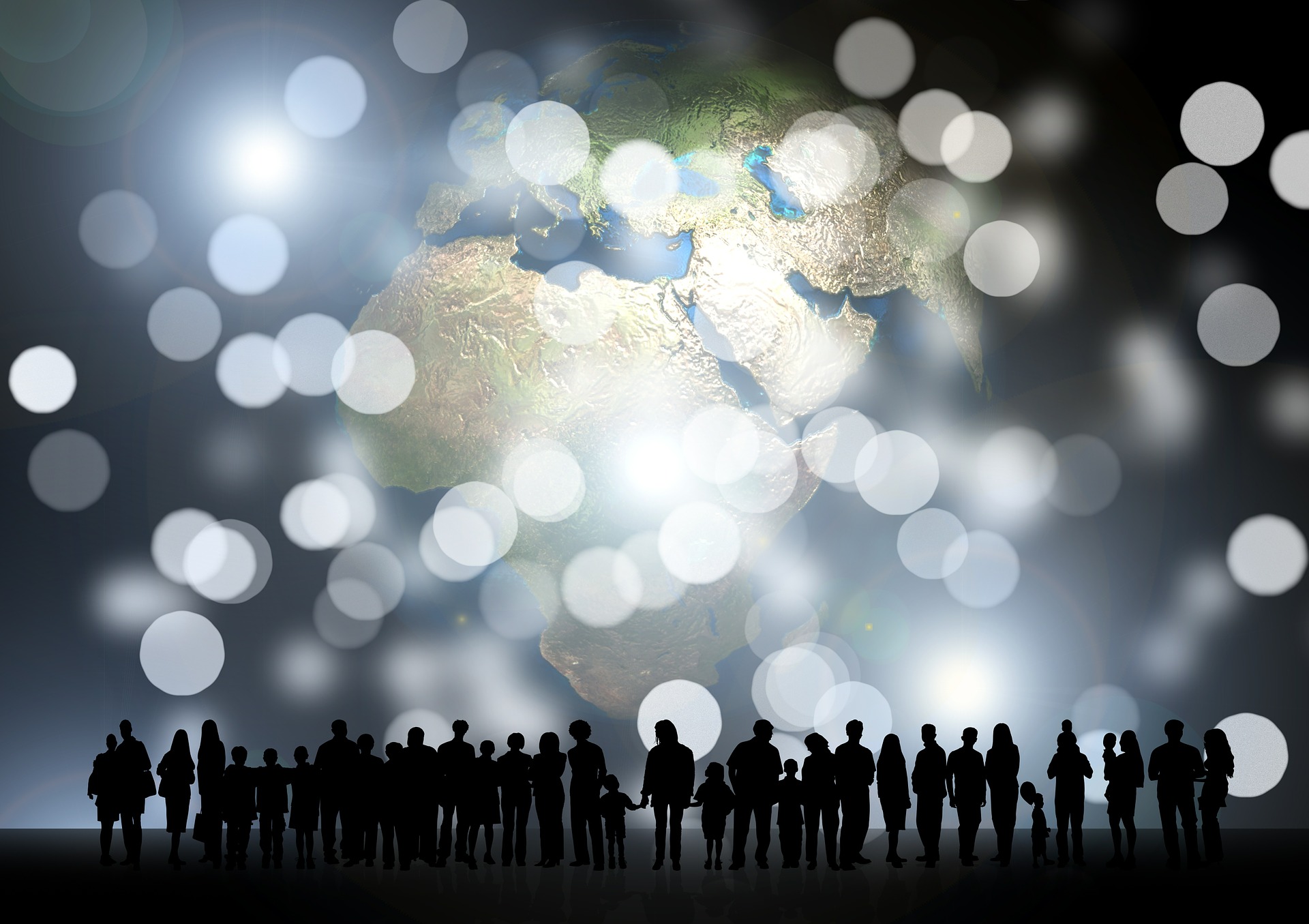 Transcribed by Amatul Hadi Ahmad
The Review of Religions, January 1994

It was customary that the 4th Head of the Ahmadiyya Muslim Association in Islam, Hazrat Mirza Tahir Ahmad, made himself available, at various times, to his community and to others to answer any questions that they put to him. Below we present a transcript of a question from a session recorded 30 September 1983 in West Ferry – Australia.

Question: How do you see the future of western society from your religion’s viewpoint?

Answer: This is a very interesting question in which all humanity should be interested, more seriously that it is. The fact is that the pursuit of pleasure and a sense of liberty coupled together have made western society what it is today. Liberty from what? Liberty from all bondage that binds man to his Creator. This is what I see in the western concept of liberty today. Liberty from all that is noble that creates responsibility, which binds you and which limit your avenues of pleasure seeking. That is the liberty which the West has got today and is still pursuing – a mad pursuit of pleasure wherever it is to be had, forgetting that it is not for man to get whatever he wants to whatever extent he wants to have it.

Man is born with limited capabilities and limited resources. He is born with limited imagination and limited reach. So, it is impossible for man to get unlimited pleasure as he desires it with the result that, more often than not, some roads end up with nothing. There is left only the sense of a hangover after the mad pursuits of worldly desires. There are other harmful side effects and society is becoming increasingly restless.

I will explain – in Oriental societies, for example, particularly those under the influence of the Moslem religion, ladies and men are generally segregated and there exist teachings to check the flow of sexual pursuits between man and woman to a certain degree. As with the live wires of electricity, the negative wire is different and the positive wire is different. If there is no insulation in between, what will happen? The flow of energy instead of taking the more difficult course, and passing through some machines and devices, would make a short circuit and destroy itself. So, Islam looks at the human urges with a desire to harness them and to put them to proper usage. Islam believes that if given unlimited liberty the urges and desires will `kick’ back and destroy the seekers of pleasure.

In contrast, in the societies where the ladies are kept in segregation, just a small glance at a beautiful face gives such pleasure to the people of that society as you cannot nowadays gain from a naked person, however beautiful that be, because you are accustomed to more and more nakedness. As you advance in a state of pleasure you get less and less of a kick, as happens with alcohol. The first mouthful of alcohol gives a large kick to those who get introduced to alcohol for the first time but then gradually they get relatively less pleasure. They advance more and more until they become alcoholics. Alcohol itself becomes a source of disease instead of a source of pleasure. This is exactly what has happened to western society in the pursuit of pleasure. They invented new ways in the name of liberty, in the name of emancipation from all the older thoughts. But where have they ended up?

I have studied the American society, for example. What happened there was, that after a while they started inventing new ways of pleasure. All the magazines were devoted to these things, all the psychological studies were concerned with these things. In the name of science they told people to seek pleasure in different directions – to go in Sadism, to go into this, to go into that. To allow homosexuality, to allow whatever sort of distortion man can think of and seek pleasure. They were told there is no harm, no taboo – that was the message of the modern society – and they did! But to what extent? They always found a dead-end to whichever road they pursued. With the result that a sort of madness started taking hold of the society – they followed Bohemianism, they experimented with hippyism and sometimes they became skinheads – just to get a kick out of life – and that kick began to kick back after a while. Some people started using drugs and sought them wherever they could lay their hands on them. Yet, it was not possible – the whole country could not be allowed to turn into drug addicts, so the Government put its foot down after a certain toleration and the war went on and ultimately these drug addicts won the game. Now the American society is completely helpless in the hands of the Mafia people. Crime became rampant to such an extent that people who wanted a kick would kill just for the sake of the thrill they got.

In America, while I was there a few years ago, there was a Radio station devoted entirely to the reporting of murders and every five minutes, on average, a murder was taking place. People were being looted and murdered, not for the sake of bread, not for the sake of the necessities of life but just for the sake of the thrill of it. They sought pleasure wherever they could find it. That is the disease of the society. In the name of liberty they are putting themselves into shackles from which (so unfortunately), they can never be liberated again. They are heading towards ultimate destruction because this pursuit, this mad pursuit of pleasure, has made them completely “undependent”,I don’t say “independent”, but rather “undependent” on their Lord. I want to make fine distinction between “independent” and “undependent.” Nobody can be independent of God but some people may believe that they are not dependent on their God so for them I use the word “undependent.” They don’t need any God any more and their materialism is leading them to further destruction. They are fighting a lost battle. The pursuit of pleasure which they adopted has now reached an end, where instead of pleasure it is just giving them misery and nothing else.

In America, for example, new venereal diseases have come into being of which the physicians had no idea before. They are spreading so rapidly and they are so resistant to all that man can conceive to use against them that they Gone completely out of control. I am talking of herpes which is related to some venereal disease and now, according to the latest facts and figures published by the American Health Department, 30% of the American population is suffering from herpes and in the next jump, they believe it may reach 60% – and then the entire society. So this means that the pursuit of pleasure has become a source of terror for them. No American can feel safe in the company of another American because he does not know when and how he can get this disease which is torturing them, which is turning them mad, which is playing on their nerve.

This is the state of affairs which people do not want to see. All they are shown everywhere on television are games and mad dancing and exhibition of one’s beauty and what not. I don’t have to explain these things to you because you can explain these better than myself. I am not much experienced of these things, only what I have seen here – I am trying to tell you. Just to point out the direction of these things is quite enough.

So what is the answer? The only answer is this – that true pleasure, lasting pleasure, true satisfaction and contentment can only be had by establishing one’s relationship with one’s Creator. That is what was created for. Society has lost direction. Man has lost his bearings. He has lost the purpose of his creation. So why should God be interested any more in saving man when he is not serving the purpose of his creation? Everything is created for a certain purpose and according to the Holy Quran man was created to be introduced to his Lord. In the previous stages of life no animal had developed enough to realise things which only man can realise. The first species which could come into contact with his creator was in the form of man – I mean direct conscious contact. This is what the Holy Quran tells us – to pursue that end, to reach one’s Lord as soon as possible and to remain with Him, to live with Him, to feel His nearness, and so on. The Holy Quran tells us that this is contentment, this is pleasure. It also tells us that by living closer to your God you become noble, because He is noble.

The only way of improving a society is by bringing that society closer to God because God belongs to all people of every colour, shade and hue. So those who belong to Allah have compassion for! all men. They don’t discriminate between white and black, between Northern and Southern, between Western and Eastern because they belong to God. So the only way to cultivate humanity is to turn to God. This is my message to you – do it now as soon as possible! I see already a losing battle in the few days I have been in Australia. I have not lost hope, because it is not for man to lose hope as long as one can pray, as long as Allah can listen to us with mercy, we cannot lose hope at all, but things in a very bad shape, to say the least.

It should be noted that the Head of the Ahmadiyya Movement in answering questions responds to the needs of the questioner. Should any further clarification be required by our readers they should not hesitate to contact the Editor.