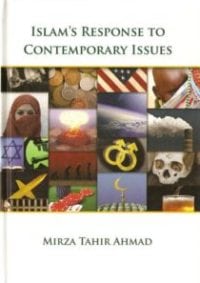 Islam’s Response to Contemporary Issues is a lecture delivered at the Queen Elizabeth II Conference Centre (London) by Hazrat Mirza Tahir Ahmad, Khalifatul Masih IV(rh), the Head of the worldwide Ahmadiyya Muslim Community. Based on Quranic teachings, the Speaker argues that:

It also contains comprehensive discussion on interest; financial aid; international relations; and the role of Israel, America and the United Kingdom in a new world order.

Its message is timeless and relates to the future prospects for peace. It is a compulsory read for non-Muslims as well as for those Muslims who have forgotten the true message of Islam.