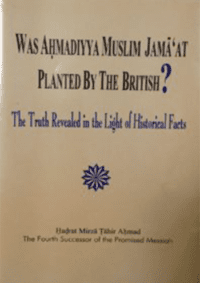 Was Ahmadiyya Muslim Jamaat Planted By The British?

This is the English translation of the second in the series of Friday Sermons that were delivered by Hazrat Mirza Tahir Ahmad, Khalifatul Masih IV(rh), as a riposte to the false allegations and noxious propaganda campaign mounted in the time of General Zia-ul-Haq and contained in the conceitedly self-styled ‘White Paper’.

In this sermon, Hazrat Mirza Tahir Ahmad, Khalifatul Masih IV(rh) answers to the often made accusation by the opponents that the Ahmadiyya Muslim Jama’at was created by the British government in the sub-continent of India to serve their purpose and to cause dissension among Muslims. Giving a forceful and effective refutation, he proves in the light of historical facts that the Ahmadiyya Muslim Jama’at was not a plant of the British government. This plant was established by Allah the Almighty with His own Divine Hands and He has always safeguarded it and will keep it under His protection in future. If any section could be considered a plant of the British, it could only be the ‘Diyuband’ sect.