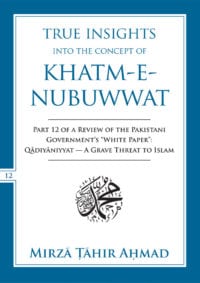 True Insights into the Concept of Khatm-e-Nubuwwat

In 1984, the Islamic Government of Pakistan ignored fundamental Islamic decorum by depriving Ahmadi Muslims many of their basic human rights including religious freedom. In an attempt to justify this action, the Government of Pakistan published a so-called White Paper under the title Qadiyaniyyat — Islam kay liyay Sangin Khatrah (Qadiyaniyyat—A Grave Threat to Islam).

Although there was nothing new in this so-called White Paper—the objections in which had already been thoroughly refuted in Ahmadiyya Jama‘at literature—Hazrat Mirza Tahir Ahmad, Khalifatul Masih IV(rh), the then Imam of the Ahmadiyya Muslim Jama‘at, replied to these allegations in a series of sermons. These sermons (in Urdu) were published by the London Mosque in 1985 and the English translation is now being published.

Hazrat Mirza Tahir Ahmad, Khalifatul Masih IV(rh) delivered this sermon on April 7, 1985 as the concluding speech of the Annual Conference of Jama‘at Ahmadiyya UK. It details the profound insight and conviction that the Promised Messiah(as) had in Khatm-e-Nubuwwat. By citing extensively from reputable sources throughout Islamic history, he demonstrates that the Ahmadiyya belief in Khatm-e-Nubuwwat is fully consistent with the consensus of the Companions(ra) of the Holy Prophet(sa) and the views held by respected Muslim scholars and authorities.