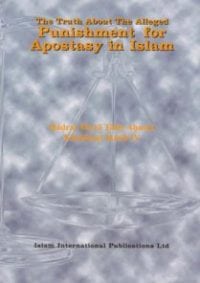 The Truth about the Alleged Punishment for Apostasy in Islam

From the earliest days till now Islam and the world of Islam have not been harmed so severely by any external enemy as by some simple-minded Muslim ulema themselves. In fact, the enemies of Islam have utilized the unwise religious edicts of these naive ulema as a basis to attack Islam.

The wrong trend among the ulema took place when, under the influence of changing socio-political environment, they preferred to adopt some politically coloured Islamic interpretations and ignored the clear teachings of the Qur’an and the noble precedence set by the Holy Prophet(sa).

Killing of apostate is one of such erroneous trends and base-less convictions. In fact, this menacing tenet is based neither on the Qur’an nor on the practice of the Prophet of Islam. This dangerous and untenable belief produced very grave consequences.

Hazrat Mirza Tahir Ahmad(rh), the fourth successor of the Promised Messiah(as) in a lecture delivered at Jalsa Salana (the Annual Gathering) UK on 27th July, 1986 analysed in depth all aspects of this heinous tenet. He showed it to be an utterly false and unfounded belief and smashed once for all the so-called arguments of the ulema in support of this claim. He has proved it to be a false belief. His arguments are based on the Holy Qur’an, the Sunnah and Ahadith of the Holy Prophet(sa) and the historical events that took place in the eras of the Righteous Caliphs(ra).

Hazrat Mirza Tahir Ahmad(rh) deals with the subject extensively and it is earnestly hoped that the address will help unbiased researchers to fully understand the true teachings of Islam on the subject. It is also hoped that it will go a long way to creating a new spirit in which Islamic teachings are appreciated in their real essence and true nature and prejudice against Islam is eradicated.