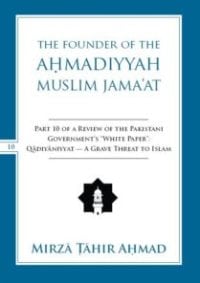 The Founder of the Ahmadiyya Muslim Jama’at

Part 10 of a Review of The Pakistani Government’s ‘White Paper’: Qadiyaniyyat – A grave threat to Islam

Hazrat Mirza Tahir Ahmad Khalifatul Masih IV(rh) delivered this sermon on March 29, 1985 at the Fadl Mosque London. It deals with the common objections made against the Holy Founder of the Ahmadiyyah Muslim Jama’at. It points out, by referring to the Holy Qur’an that similar objections were made against the earlier Prophets.