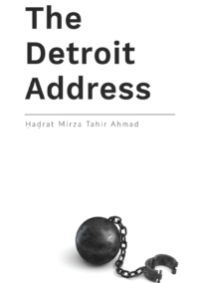 The United States has been plagued with issues of racial tension since its inception and the issue of racial inequality continues to be at the heart of unrest within the country. The Detroit Address is a Friday Sermon delivered by Hazrat Mirza Tahir Ahmad(rh), the Fourth Khalifah of the Ahmadiyya Muslim Community, on October 16th, 1987, in Detroit to the members of the Ahmadiyya Muslim Community. In it, he pinpoints factors that have caused racial tension in some communities in the United States, and presents Islam’s longstanding rejection of the notion that any one race if superior to another.

The root cause of tension between Pakistani and African American Ahmadis is found to be an inferiority complex in some members of the Community. Giving the example of the people of Nuh(as) [Noah], Ahmadis are warned that failure to change their ways and adopt mutual love and compassion between one another will result in an unfortunate fate for both themselves and their nation. He admonishes the American members of the Community to break the chains of societal and psychological oppression by urgently re-examining their way of life in light of the character of the Holy Prophet of Islam(sa).