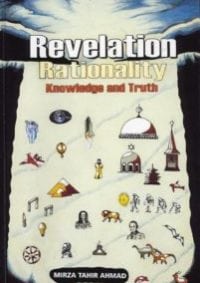 Does revelation play any vital role in human affairs? Is not rationality sufficient to guide man in all the problems which confront him? Numerous questions such as these are examined with minute attention.

All major issues which intrigue the modern mind are attempted to be incorporated in this fascinatingly comprehensive statute.

Whatever the intellectual or educational background of the reader, this book is bound to offer him something of his interest.

It examines a very diverse and wide range of subjects including the concept of revelation in different religions, history of philosophy, cosmology, extraterrestrial life, the future of life on earth, natural selection and its role in evolution. It also elaborately discusses the advent of the Messiah, or other universal reformers, awaited by different religions. Likewise, many other topical issues which have been agitating the human mind since time immemorial are also incorporated.

The main emphasis is on the ability of the Quran to correctly discuss all important events of the past, present and future from the beginning of the universe to its ultimate end.

Aided by strong incontrovertible logic and scientific evidence, the Quran does not shy away from presenting itself to the merciless scrutiny of rationality.

It will be hard to find a reader whose queries are not satisfactorily answered. We hope that most readers will testify that this will always stand out as a book among books – perhaps the greatest literary achievement of this century.