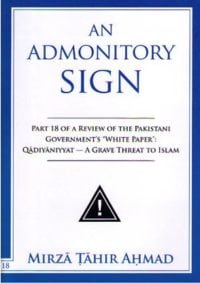 Part 18 of a Review of The Pakistani Government’s ‘White Paper’: Qadiyaniyyat – A grave threat to Islam.

In 1984 the Islamic government of Pakistan set aside all Islamic injuctions and took upon itself the burden of depriving the Ahmadi Muslims of many basic human rights including religious social freedoms. In an attempt to justify this action, the government of Pakistan published a so-called White Paper under the title ‘Qadiyaniyyat – Islam kay liya Sangin Khatrah’(Qadiyaniyyat – A Grave Threat to Islam).

Hazrat Mirza Tahir Ahmad, Khalifatul Masih IV(rh) delivered this sermon on May 31, 1985 at the Fadl Mosque London. This is the final Friday sermon in the series. In this sermon, Huzoor(rh)has warned the Pakistani government and its people about the serious consequences of opposing the Promised Messiah(as) and his Community. In this respect Huzoor(rh) cites some recent events which constitutes a warning and also narrates some warnings of the Promised Messiah(as).