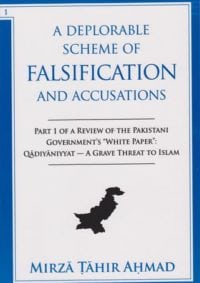 A Deplorable Scheme of Falsification and Accusations

An English translation of the Friday sermon delivered by Hazrat Mirza Tahir Ahmad, Khalifatul Masih IV((rh) on January 25, 1985 at the Fadl Mosque, London

In 1984 the Islamic government of Pakistan set aside all Islamic injunctions and took upon itself the burden of depriving the Ahmadi Muslims of their religious, social and human rights. In an attempt to justify this action, the Government of Pakistan published a so called White Paper under the title Qadiyaniyyat-Islam kay liyay Sangin Khatrah (Qadiyaniyyat-A Grave Threat to Islam). Although there was nothing new in this so-called White Paper and the Jama’at literature already included detailed answers to all the issues which were raised, neverthelessHazrat Mirza Tahir Ahmad, Khalifatul Masih IV((rh) , the then Imam of the Ahmadiyya Muslim Jama’at, answered these allegations in a series of Friday sermons. These sermons (in Urdu) were published by the London Mosque in 1985 and the English translation is now being published.Hazrat Mirza Tahir Ahmad, Khalifatul Masih IV((rh) delivered this sermon on January 25, 1985 at the Fadl Mosque, London. This is the first Friday sermon in a series of eighteen. It gives a general introduction to the unjust and cruel steps taken by the government of Pakistan and how they have ended up in a dismal failure for the government and a clear victory for the Ahmadiyyah Muslim Jama’at.