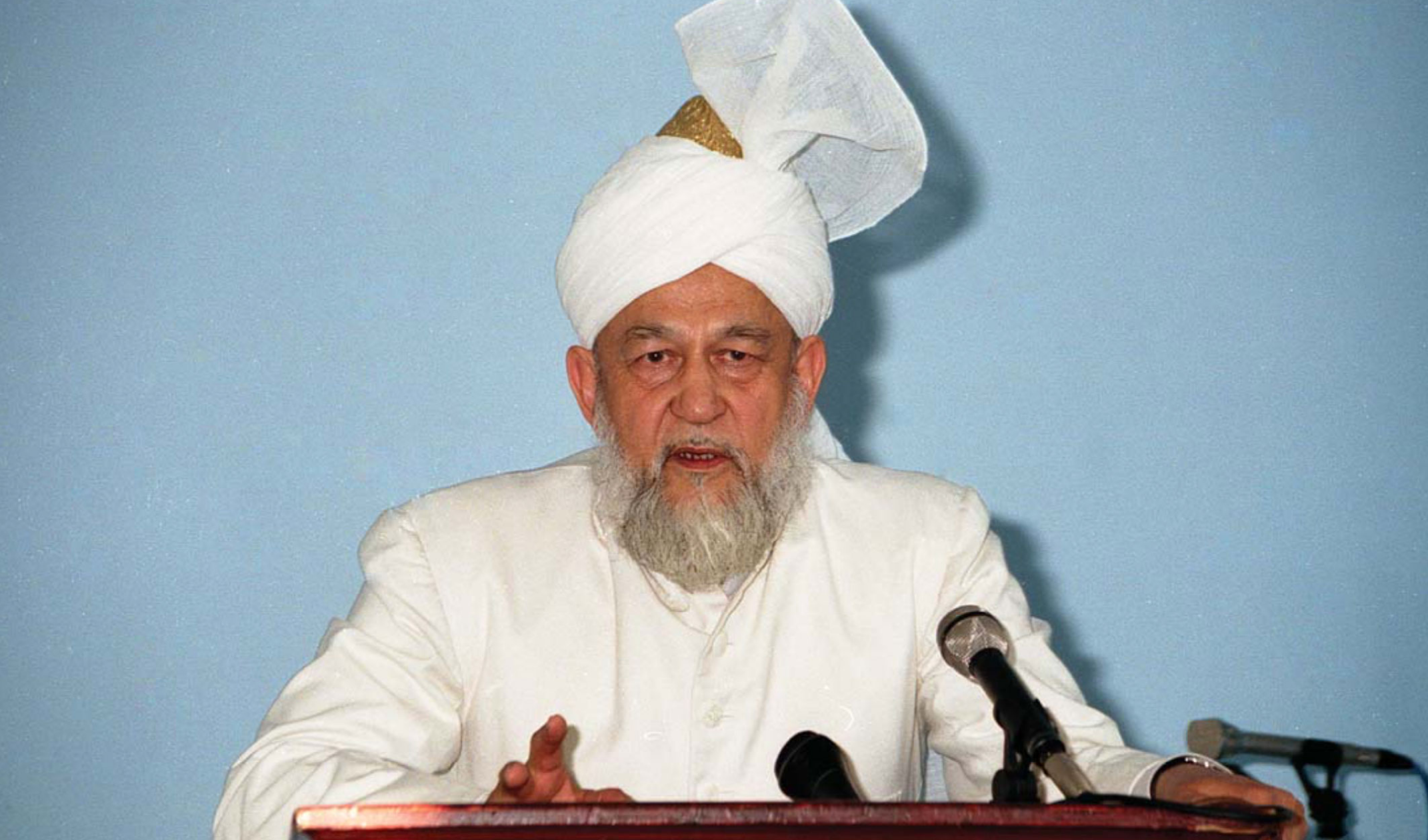 Printed in The Review of Religions, April 1994

The following article is the concluding part of the present series of five articles being published in the Review of Religions since December, 1993. These articles were written by Hazrat Mirza Tahir Ahmad, before his election as the Caliph of the Ahmadiyya Muslim Community and were originally published in the Al Furqan of Rabwah during 1976. The present series has been rendered into English by Mansoor A. Shah to whom the Review of Religions is greatly indebted.

Although from the foregoing arguments, readers may be unable to find out the precise period, as compared to the three centuries of nascent Christianity, required for the victory of Islam over other faiths and completion of its mission, one issue must have become glaringly obvious that this period is firmly connected with the advent of the Imam Mahdi and the Promised Messiah. This advent represents a milestone in the history of Islam and has been fixed on the crossroad were Islam was to join the fast lane while, for other non Ahmadi Muslims, it was an unending and narrowing track. But those who are Ahmadis and have expressed their faith in the one who, while remaining wholly subservient to the Holy Prophet(sa), claimed under Divine command that he was the World Reformer of the latter age and the Promised Messiah, for such Ahmadis, this period has become specific before them. According to them, the fourteenth century after the advent of Islam is the century for the preparation of the worldwide triumph of Islam.

Returning to the subject under discussion, we take up this question again that why is it that the religion of the Holy Prophet(sa) has been unable to prevail over other faiths of the world and why, despite this apparent failure, did divine punishment not wipe out from the face of the earth those people who rejected him?

This question has two parts. Firstly, why did Islam not prevail in the first phase of its nascent development? One answer has already been given previously. The second answer is that the Holy Prophet(sa) was not confined to any region or nation but his message addressed the whole world and his objective was to gather the whole of mankind under one religion. This could have only been possible when the physical means for bringing mankind together also existed. Such means did not exist during the time of the earlier rise of Islam. Indeed, a vast part of the world, which we call the New World, had not been discovered then. Even if Islam had prevailed over the then known world, almost half of the world would have remained bereft of the light of Islam. In addition, the means of communication and facilities for bringing mankind together under one universal brotherhood had not been discovered. In view of these difficulties, the ultimate victory had to undoubtedly await the time when the Will of God Almighty allowed distances to become insignificant and neither mountains, wild wastelands, nor vast oceans to stand as a hinderance in international relationships being established.

In light of this, when we study the Holy Quran, we find numerous prophecies which tell us about the progress of man in latter ages. Sometimes we find references to fast means of transport and at other times of unions and associations bringing mankind together. Sometimes we find a prophecy relating to the mass production of books and journals through which man can easily convey his thinking and point of view. Then we also have prophecies which foretell that some seas will be made to join together which at the time of the revelation of the Holy Quran had dry land separating them. Reflecting on these prophecies, one comes to the natural conclusion that before the time of the ultimate victory of Islam takes place, these signs would have either manifested themselves or would be undergoing rapid development towards this end. Therefore, whenever man beholds these signs, he should naturally anticipate that the time has come for the advent of the Imam who would initiate the movement for the ultimate victory of Islam over all false religions.

These second part of the question is that if complete victory could not be accomplished, why did divine punishment not annihilate the people who rejected the Holy Prophet(sa)? The answer to this is that if two phases of victory had been predestined, divine chastisement should also have two pre-ordained periods – one in the beginning and the other in the latter age. Common sense cannot for a moment accept the logic that the second victory should have been pre-destined for the a latter age, yet without the waiting for that age, divine punishment should unleash itself and annihilate the disbelievers. Thus, if another victory had been predestinated for the latter days, divine punishment should also have been reserved for that age.

Numerous verses of the Holy Quran prophesy precisely that. When we reflect on these verses, it becomes clear that there are many Signs of God and misfortunes which were earmarked for those who deny the Holy Prophet(sa) of Islam. Some of these Signs and punishments derive from fire while others are somewhat like the havoc created by great earthquakes. Their intensity and the area that such disasters would cover would be so great as to reduce large superpowers and colossal nations, which once stood like unscalable mountains, to dust. All their isms, might and power would disintegrate to such an extent that they would either have to resign themselves to belief or be practically ground to dust. The long and short of all these prophecies is that all those hindrances and barriers which had hitherto prevented them and kept them bereft of complete obedience to the Holy Prophet(sa) of Islam would be removed from their paths. Describing such a punishment, God Almighty alludes to these superpowers metaphorically as mountains in Chapter Taha of the Holy Quran and states:

`They ask thee concerning the mountains. Say, My Lord will break them into pieces and scatter them to dust. And He will leave them as a barren, level plain wherein thou wilt see no depression or elevation. On that day, they will follow the caller (in whose teaching) there will be no deviation; and (all) voices shall be hushed before the (voice of the) Gracious (God) and thou shalt not hear but a subdued murmur.’ [20.106/109]

The subject of these verses does not relate to Doomsday or to the final days before the Day of Resurrection but to life on this earth. If the connotation derived is that the mountains will break into pieces on Doomsday, then `On that day they will follow the Caller’ will be meaningless because it would mean that on that day they will begin to obey fully the call of the Holy Prophet(sa) in whose teaching there will be no deviation. It is obvious that when mountains will be broken into pieces and the land will be made barren, man will be far too insignificant to confront Doomsday not only live and kicking, but as in everyday life, in full control of his powers of discernment between black and white and able to accept or reject the faith he so pleases while as the saying goes, all hell is breaking loose around him.

Therefore, the words, `On that day they will follow the Caller’ have made it abundantly clear that the mountains which were going to be broken into pieces are not any physical mountains but those hindrances and obstacles in the path of Islam in the form of great superpowers which stand like mountains blocking the march of Islam. In other verses of the Holy Quran also, references to the mountains is used as a metaphor but the restraints of space restrict a lengthy discussion on these. In any case, one thing is very clear that a direct instrument in breaking the colossus of the mountains will be the publication of Islamic literature. At that time, the question phrased in the respective lingua franca of that time will be asking the Islamic world what will become of such mountains and how can Islam prevail over these great and mighty powers who numerically, economically, financially and in all material strength pose a danger and great misfortune for Islam. When the Muslims of today are blindly following Western trends and lifestyles and aping Western culture, then how can Islam and Islamic values overcome the materially superior force. The Holy Quran commands, O Prophet, Say unto them that my Lord will smash into pieces these mountain like superpowers and proud nations, break their stiff necks, scatter them as dust and leave them barren. Reduced to this level of humility and selflessness, they will became capable of following you an obeying you and obeying your teachings in which there is no deviation.

In many other verses of the Holy Quran cited earlier, we find references to divine punishment of this kind which relate to the latter days. Now the question is that when during these fourteen hundred years, the world has all but forgotten these things and centuries old forewarning have been erased from human minds, then can divine punishment inflict its toll in the present age without a fresh forewarning? This question has been answered earlier and it has been clarified that before divine punishments takes a fresh toll in this age, the advent had to take place of an Imam [leader] who was once again to admonish and forewarn mankind of these difficult and disaster ridden times.

How was this forewarning given? What details have been given of such calamities? How far have the forewarning seen the fullness of time? How many yet remain to be fulfilled? These are all matters which will be taken up in the next series.

The claim of the Ahmadiyya Muslim Community is that this unending series of trails, tribulations, misfortunes and calamities being experienced in this age are not links in the chain of routine day to day events but represent a divine punishment. The Promised Messiah had warned them well ahead of time and through very clear and precise prophecies had alerted mankind that the final triumph of Islam had now commenced. If the world does not bow before the teachings of the Holy Prophet(sa) of Islam then God Almighty will pile up disaster after disaster, one after the other to shake and awaken the world from its slumber. This will continue and will not end till Islam finally prevails over the world.

In the next series, we shall Insha Allah assess this subject to see how the Founder of the worldwide Ahmadiyya Muslim Movement completed his mission and which arguments prove that he had been commissioned by none other than God Almighty.