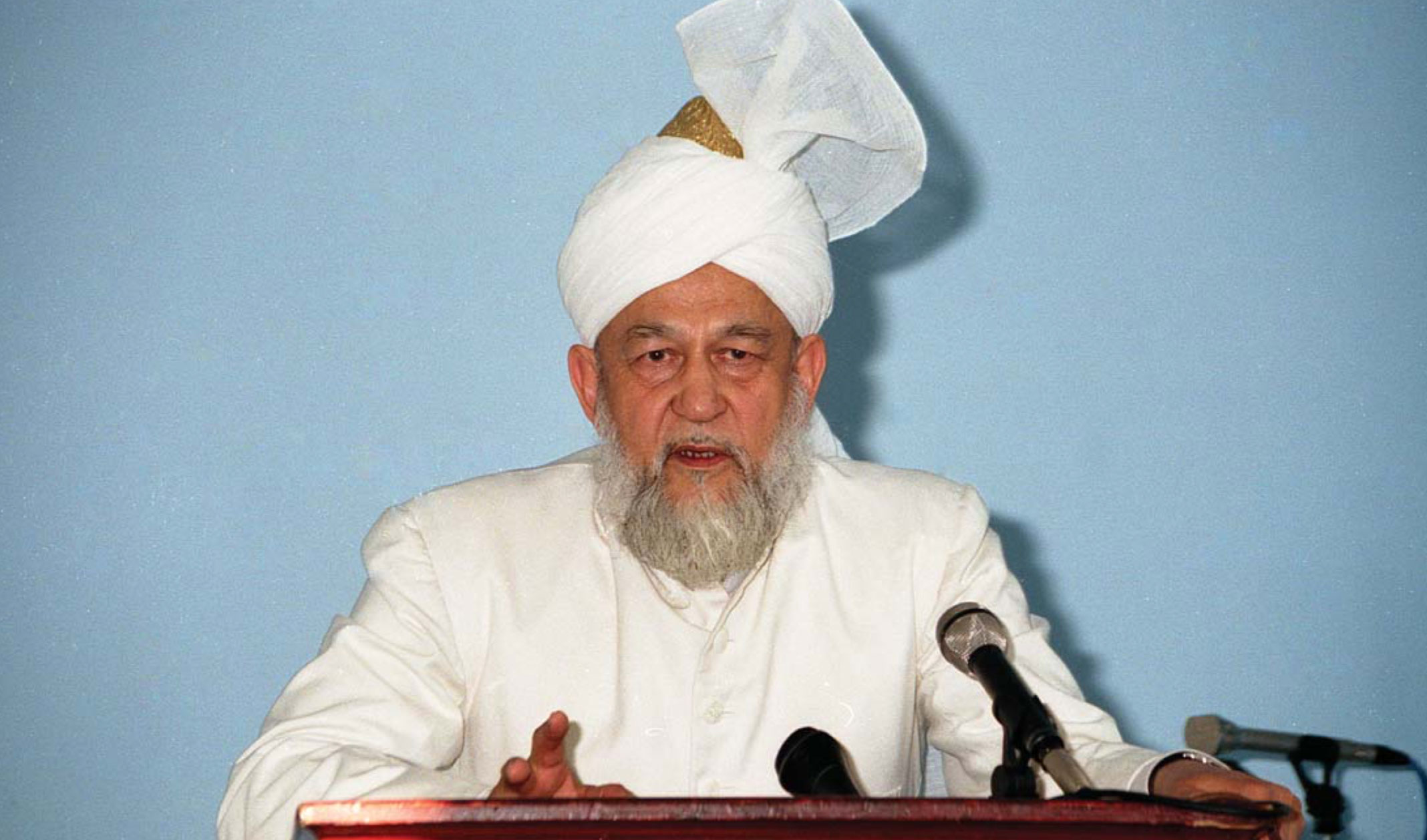 A great, pious and just king died. When Israel (The Angel of Death) returned to heaven with his soul, the other angels asked him: ‘Have you ever felt pity for anyone during your assignments?’ “Yes,” said Israel. “Once a woman gave birth to a boy in a desolate desert where for miles no human was around. I had been sent to collect her soul, and the infant was left behind. I could not help feeling great pity for the helpless baby.” ‘Do you know,’ said the angels, ‘the soul of the mighty king you have brought today belongs to the same infant you left in the wilderness.’ “Glory be to the Most Merciful Who does what He wills,” cried Israel. (Imam Al-Ghazali, Keemya-e-Sa’adat)

The true purpose of why anything happens is known only to the Almighty as illustrated by the above anecdote. Nonetheless, some events in life shake the foundation of the strongest of faith when the sense of loss and heartache ensues. The passing of Hazrat Khalifatul Masih IV was one such tragic event in my life and in the lives of many.

A host of apprehensions, regrets, and grief overwhelmed me. Hazur’s presence, Hazur’s advice and Hazur’s prayers were an invincible shield between me and all adversity. With the passing of Hazur I was abruptly stripped of any illusions of my own immortality. I felt vulnerable. I felt unprotected.

My apprehensions arose from my losing Hazur’s guidance and Hazur’s prayers, my regrets from not having spent more time with Hazur, and my grief from losing someone who loved me so dearly yet so selflessly. Who would I now open myself to when plagued by my inner fears and doubts?

I did not have to tell Hazur about my troubles. Hazur had other sources. In 1992 or 1993 while in Toronto, I met Hazur at Fajr Salat. Hazur said to me “I saw in my dream last night that you are facing some problems. Do not worry I prayed for you. Allah will help you and protect you.” Indeed the problems just faded away.

In the summer of 1994 I saw in a dream that Hazur needed help in a matter. Reluctantly I sent Hazur a letter about this. I knew Hazur to be a fiercely self-dependent person who would rather limit his needs than to put himself under obligation to others. Hazur’s thinking was that faith in Allah and self-reliance meant that the need you cannot meet yourself is not your need. I expected a reprimand letter from Hazur. The letter in return I received, however, was handwritten by Hazur and hand-delivered to me. Hazur said in the letter that he had noted the date of my letter and the date of my dream. A day or so prior to the date of my dream Hazur had prayed to Allah for help in this matter. In response Allah had out of this wide world chosen a person from America to help. Hazur went on to say that Allah’s choice of the helper was very gratifying to him.

My father, Mr Sheikh Rehmatullah sahib, was the Amir Jamaat Karachi during the time of Hazrat Khalifatul Massih II. Hazur and my father struck up a good relationship and friendship around that time. I was a beneficiary of this friendship. Hazur treated me like a son. In January 1978 Hazur was the chief guest at my wedding in Lahore. Over the years my relationship and bond with Hazur grew stronger and stronger. The late M. M. Ahmad sahib also had significant role in strengthening this relationship. He encouraged me to visit Hazur frequently in London and seek Hazur’s companionship. In a letter to me in July 1991 Hazur noted in his own hand “seeing you often, gives me great joy and happiness like it does your father Sheikh sahib. God only knows who feels more joy. Your father or me!“

On January 23, 1995 Hazur wrote a letter in English to me. It read “I wanted so much to give you a surprise by speaking to you on the telephone on January 1st this year but somehow one thing or another robbed me of this pleasure. I thought before the first month of the year runs out I should write to you a few words in my own hand.

You know what? I like you so much and … that I require no reminders to remember you in my prayers….Please convey my deep regards to your wife and love to your charming daughters. Last but not the least to Ruqayya…” (Ruqayya is my youngest. She was 7 years old then)

In April 2003 I was not feeling well. I had bad dreams and had this feeling of impending doom. My daughter Fatima wrote to Hazur to pray for me. In his letter dated April 12, 2003 Hazur stated “tell your father Inshallah nothing untoward will happen to him. Allah will grant him good health and a long life. Allah will be his Protector and Guide… Amin .”

My last contact with Hazur was on the telephone on April 13th 2003. Hazur was in good spirits. I answered some questions Hazur had about the some of the medications that were prescribed for him. I promised Hazur that I would be in London in a couple of weeks. Hazur passed away April 19th, 2003.

O Allah write me down as a witness that this man of yours fulfilled his obligations to the best of his abilities and more. He gave it his all.

This is just a glimpse and some reflections. There is much, much more to recollect for me and others. Everyone who came in contact with Hazur has something to say. Hazur touched all our lives so deeply. He was that special friend to everyone. He would uplift everybody’s spirits.

Now years later, the love and graciousness of Hazrat Khalifatul Massih al-Khamis, faith, reflecting and prayers have greatly eased my grief and fears. There is a keener awareness of my own mortality. There is more deliberation and less expediency in my work, more awareness and more focus. Temptations do not work on me as much. My ego is much subdued. Life’s pleasures are different.

Even in his death, Hazur has taught me how to be a better person. The Holy Prophet(sa) said: Kafa Bilmaote Waeezhun; Death is the most effective preacher of them all.

And He found you in want and enriched you.